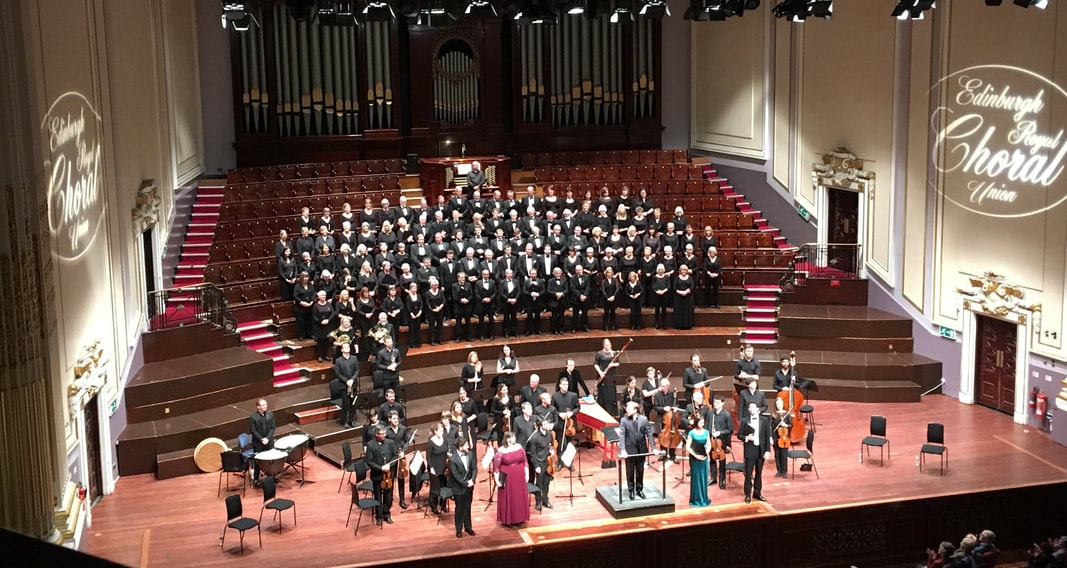 The Edinburgh Royal Choral Union is a mixed choir of approximately 120 voices. We are committed to delivering an exciting and diverse musical programme, encompassing different periods and styles, from new music by contemporary composers including Judith Bingham, Thea Musgrave, Jonathan Dove and Paul Mealor, to more traditional fare, such as our annual performance of Messiah in the Usher Hall.
Many of our past concerts are listed at the end of the Concerts page.

Performance schedule
ERCU’s season starts with rehearsals in September, building up to a concert in November followed by a Christmas concert in December. On 2 January each year, we perform Messiah at the Usher Hall to a capacity audience. This tradition is a highlight of Edinburgh’s new year festivities. Rehearsals start again in January, leading to a concert in March. Our final concert of the season is usually in May or early June.

ERCU is often engaged for other performances: we have provided choral backing for world-renowned tenor Andrea Bocelli in Glasgow and Sir Karl Jenkins conducted us in a performance of his own works with the Royal Scottish National Orchestra at Glasgow Royal Concert Hall during his 75th birthday celebration tour. We recorded Messiah choruses with the Scottish Chamber Orchestra for the festive Street of Light in Edinburgh and sang Holst’s Planets in the Usher Hall with the Royal Philharmonic Orchestra. Other performances include Beethoven’s choral symphony with the Warsaw Philharmonic Orchestra and concerts, both with the RSNO, to celebrate the centenary of the Usher Hall and the Scottish hosting of the Commonwealth Games. We recorded the Christmas watchnight service 2018 for BBC Radio.

ERCU also hosts “Come and Sing” events, when guests are welcome to join us for a day of music conducted by our chorus director.

Rehearsals
We rehearse on Tuesdays at Augustine United Church, George IV Bridge, Edinburgh, from 7.30 pm to 9.45 pm, with a break for refreshments. Rehearsals usually commence in September and run through until the end of May or early June.

The choir runs training weekends from time to time, when we prepare for performances and hold workshops hosted by professional singers. Such weekends—usually in venues outside Edinburgh--are also very enjoyable social occasions.

Governance
ERCU is a registered Scottish charity and a company limited by guarantee. We have a board of directors and an administrator who assists in the day-to-day running of the choir. Our chorus director is an ex officio member of the board.