We received a wonderful review in the Edinburgh Music Review by Brian Bannatyne-Scott. Below is an extract but you can read the full review here.
"Let me say, categorically, that this was one of the best ‘Messiah’ performances I have ever heard, and huge congratulations must go to all those involved.
"Conducted with flair and elan by Michael Bawtree, and with four exceptional young Scottish or Scottish-based soloists, this was a performance to savour, and it was greeted at the end by huge cheers and bravos. It was rather interesting to hear the work at Easter time, because, of course, the second and third parts describe the Passion and Resurrection of Christ. The first part is about the Nativity, and this is why it is more often performed at Christmas, but the Easter context was revealing, and poignant.
"The concert started with a moving rendition of a Prayer for Ukraine. It is wonderful how the British public has taken the crisis in Ukraine to its heart, and there was a retiring collection for a relevant charity at the end.
"The Edinburgh Royal Choral Union was arrayed in the choir gallery in nicely spaced order, above a small but hand- picked chamber orchestra, the Edinburgh Pro Musica Orchestra, who played throughout with great clarity. With John Kitchen at the harpsichord and Morley Whitehead at the organ, we had two of Edinburgh’s finest musicians in place, and Michael Bawtree, as conductor, controlled the performance from the podium. Mr Bawtree is a wonderfully flexible and lively figure, almost dancing before the performers, and as soon as he launched into the Sinfonia at the beginning, we knew we were in for a thrilling concert. Preferring brisk tempi, but never too fast, the work sped along at Mr Bawtree’s urging, and there were none of the longueurs which can slow ‘Messiah’ down. Judicious cuts took us through the whole piece in two and a half hours, with a twenty minute interval, and the time flew by. The chorus stands and sits were perfectly executed, the soloists, who sat at the sides, moved beautifully into position for their arias, and the whole piece flowed from beginning to end with a perfect inevitability. " 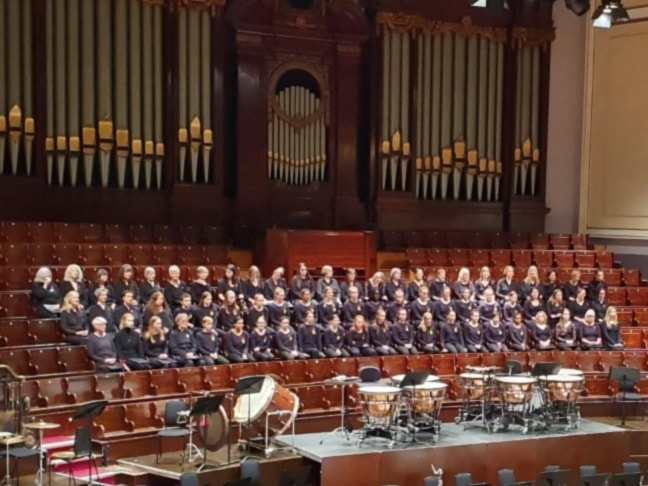 5 * review
We were proud to participate in this stunning performance of Mahler's third symphony played by the Prague Symphony Orchestra.
The ladies of the choir teamed up with the National Youth Choir of Scotland and singers from Edinburgh University Choir.
Read the full review here.

11/5/2015
5* Review
---
Their Beethoven Nine was extraordinarily fresh: I actually felt I was hearing it for the first time. Kaspszyk’s pacey tempos were thrilling and exhilarating: the development section in the first movement seethed and went like the wind; in the pounding Scherzo I almost ducked as the rhythms flew off the page like bullets. The slow movement sang as it always does, with not one ounce of drag; and the fantastic, searing performance of the finale by the Edinburgh Royal Choral Union with four fine soloists and the Warsaw Phil felt like being there as the music was born. I found the whole thing totally cathartic.
Read the full review on The Herald’s website.