There are several pages in this section. The first page gives an account of the first 100 years of the choir. Other pages describe anniversary celebrations from the past with various photographs.  See the drop down list in the menu under "History" or at the bottom of the page.

Messiah
Messiah was first sung by the society in 1861. Annual new year performances at 12 noon began in 1888, uninterrupted even by two world wars.

Our 50th anniversary was in 1908. You can read more about that and see photos here.
The second 50 years embraced two world wars. Listening to good music was found to be the best escape from the anxieties of those dreadful years.
Royal Charter
In 1911 the society received a royal charter and was henceforth entitled to be called the Edinburgh Royal Choral Union.
Our conductor is interned
When the resignation of Dr Collinson was accepted in 1913, Mr Gottlieb Feuerberg, of Perth, was unanimously appointed. Mr Feuerberg conducted the new year’s day performance of Messiah in 1914. Then he prepared the choir for a concert version of Wagner’s Parsifal, conducted by Emil Mlynarski, the conductor of the Scottish Orchestra, after which he conducted a performance of Mendelssohn’s Hymn of Praise at the opening of the Usher Hall on 6 March of that year.
But although he had been in this country for eighteen years, and had married the daughter of a Scottish clergyman, Mr Feuerberg did not apply for naturalisation until war broke out, and it was then, of course, too late. He was arrested and interned as an enemy subject shortly after the outbreak of war.
Diamond Jubilee
In the last year of the First World War the society celebrated its diamond jubilee (60 years) with two concerts in March, for which the Hallé Orchestra was engaged. At the first, Mr Greenhouse Allt conducted the choir in a performance of Elgar’s choral trilogy The Spirit of England and at the second Sir Henry Wood conducted a programme that included Beethoven’s Choral Symphony.

ERCU continues to promote new music and give Scottish premieres, including The Farthest Shore by Paul Mealor, The Voices of our Ancestors by Thea Musgrave and St John Passion by Bob Chilcott. The Scottish Chamber Orchestra joined ERCU in 2009 for its world premiere performance of Judith Bingham’s Shadow Aspect, commissioned for the choir’s 150th anniversary. ERCU performed another work by Judith Bingham, The Christmas Truce, in November 2014 as part of a programme of music to commemorate the centenary of the beginning of the Great War. Earlier that year the choir joined the Royal Scottish National Orchestra in concerts to celebrate the Commonwealth Games and the centenary of the completion of the Usher Hall.
Other highlights have included visits to Orkney’s St Magnus International Festival for performances alongside the St Magnus Festival Chorus, the Festive Street of Light in Edinburgh, for which Messiah choruses were recorded with the SCO, Holst’s Planets in the Usher Hall with the Royal Philharmonic Orchestra and a sell-out performance in 2018 at the magnificently restored McEwan Hall of Verdi’s Requiem side by side with the Edinburgh University Chamber Choir and student instrumentalists. 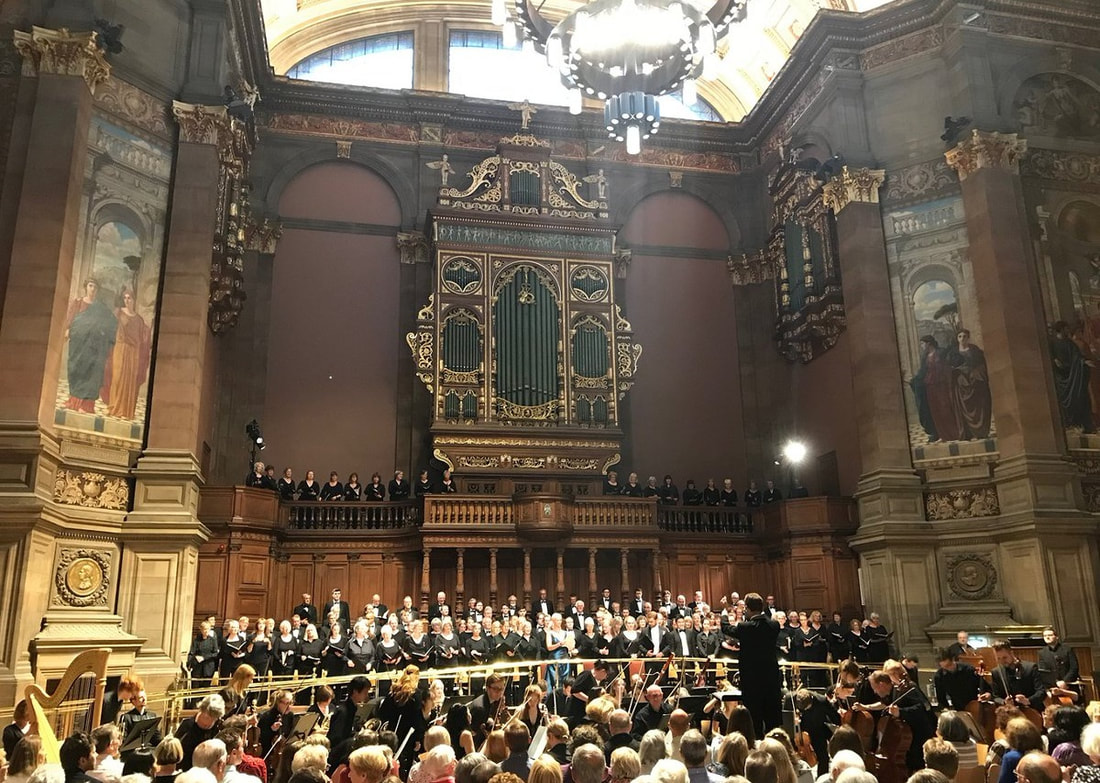